The Houston Astros made national news yesterday, and not just for their 3-2 loss to the Dodgers last night and George Springer’s thumb injury.

The big news came before the game, when Astros General Manager Jeff Luhnow released a statement about the club’s quote “difficult decision” to add closer Roberto Osuna to its roster last week – even though he was still under a 75-game suspension for violating the league’s domestic violence policy.

Osuna is facing criminal charges in Canada for allegedly assaulting his domestic partner; but the Candadian court system hasn’t fully released details of the charges.

His court date has been reset to early September – yesterday, he joined the Astros’ active roster.

In his statement to the press, Astros GM Luhnow wrote, “We welcome being held accountable for all of our personnel decisions. Time will tell which ones were right and wrong. We believe that Roberto will not let us down.”

According to a column in The Toronto Sun published over the weekend, The Astros had been interested in Osuna for more than a year; last year, The Blue Jays rejected their offer for the star closing pitcher.

This year’s offer from the Houston Astros for the 23-year-old facing criminal charges was for about half of last year’s offer, according to the Toronto Sun. 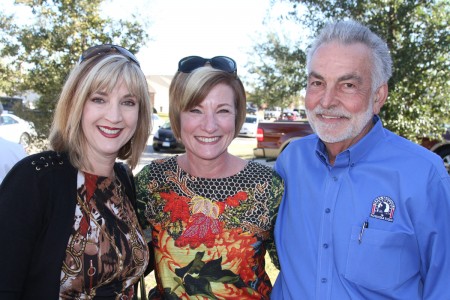 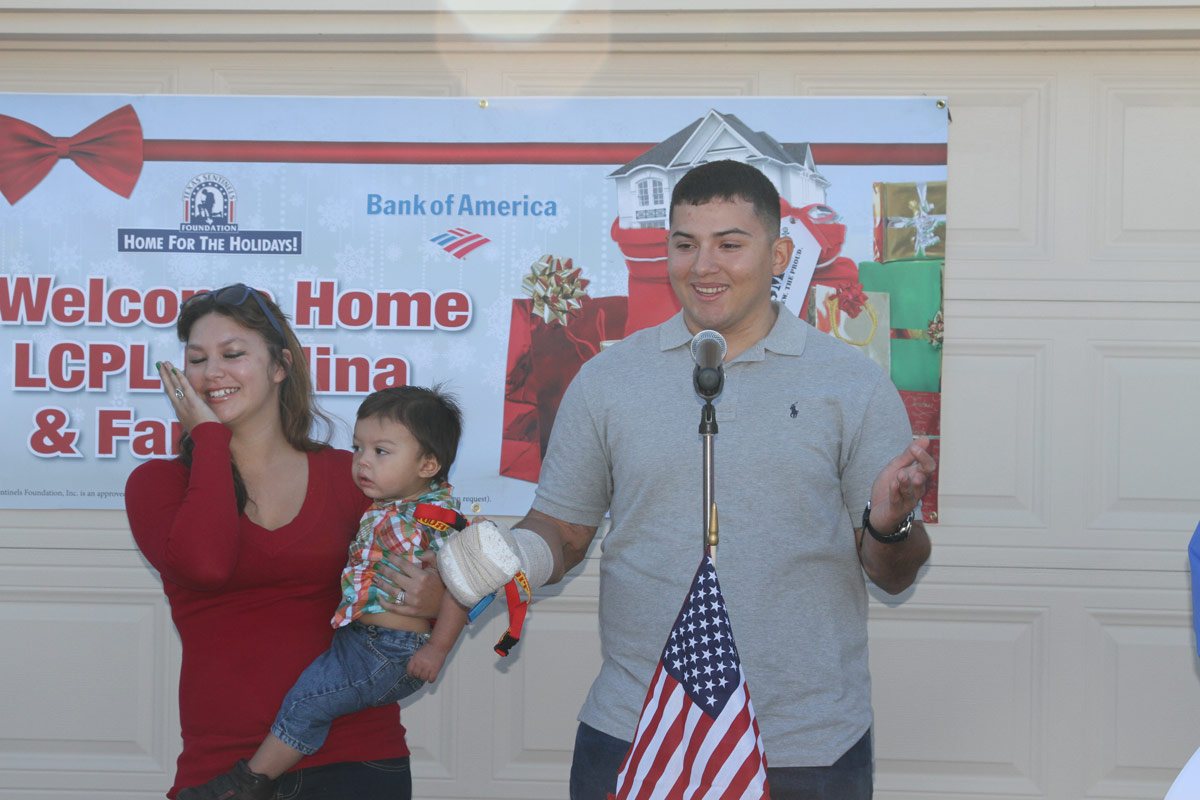 Today, I took part in a surprise “Home for the Holidays” celebration event where the Texas Sentinels Foundation handed over the keys to a refurbished home to a wounded Afghanistan veteran.

As the event’s official photographer for the nonprofit organization, I feel honored to be able to help capture this moment in the Jesse Medina family’s life.

The Foundation alerted their family and close friends – and everyone kept the secret.

See more photos on the story, which I also wrote, on the Texas Sentinels Foundation website:

Thanks to Bank of America, Jesse Medina receives debt-free home

Here are the first three paragraphs of the story:

Marine Lance Corporal Jesse Medina and his family were surprised today by Bank of America and the Texas Sentinels Foundation with the keys to a debt-free, mortgage-free home in the Northcrest Village subdivision in Spring, Texas.

They thought they were going to a Texas Sentinels Foundation Christmas luncheon. They were — lunch was served — but they didn’t know friends, family and local media would be there to congratulate them on their new home.

The Marine and his wife, Megan, and son, Aidan, received the keys to their new 2,348-square foot, 3-bedroom, 2-1/2-bath home and saw it for the first time after a brief key presentation ceremony.

I wrote the press release about a new RE/MAX office that opened in Galveston.

I then sent the press release to media contacts in the greater Houston region.

The article, “RE/MAX Leading Edge now open in Galveston,” also contains autobiographies of each of the office’s owners that were submitted by them.

The press release was also submitted to RE/MAX media relations and marketing professionals in Denver. 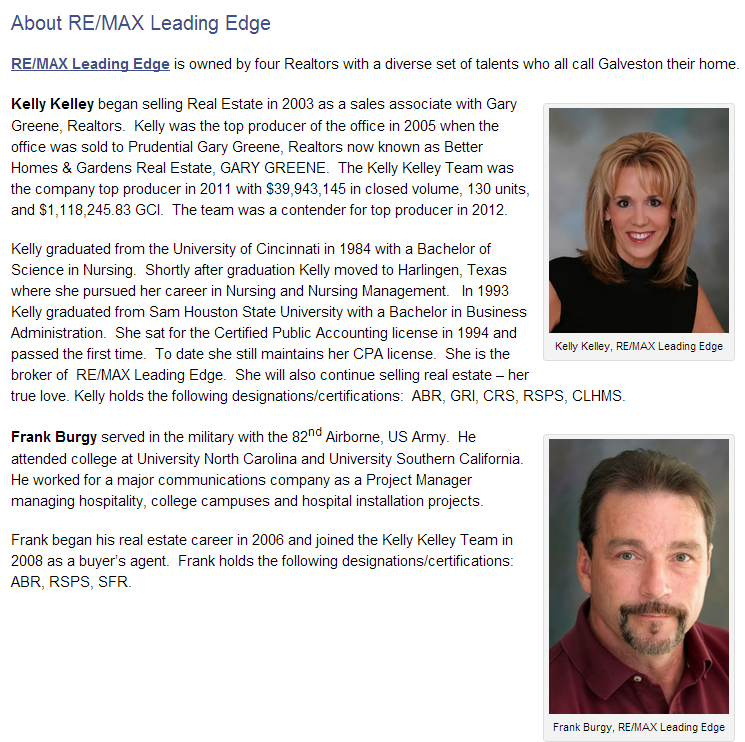 Here are the first four paragraphs of the press release:

RE/MAX Leading Edge in Galveston opened its doors today for business and is owned by four successful local Galveston resident Realtors. RE/MAX franchise Broker/Owners Kelly Kelley, Nicki Huprich and Sales Associate/Owners Ryan Moody and Frank Burgy are prepared to meet all of the real estate needs on the Island.

“We’re centrally located on the island and have experience in commercial properties, new developments, condos, residential – the whole gamut of what real estate in Galveston is all about and we plan to serve the entire market,” Burgy said. “When you come off the seawall, we’re the very first real estate office you see, and we’re located on the defining line of the West End of Galveston.”

Located at 3616 7 Mile Road on the edge of the West End of Galveston, the office is highly visible to full time Galveston residents as well as the second home and resort market.

“Who doesn’t want to live near a beach?” asked Moody. “The Texas Gulf Coast offers small hometown living in a resort environment. Galveston is not only a great place to live full time but many Texans find Galveston a great place to own a second home.  Our prices are competitive with other resort markets.  Driving one or two hours to a second home is more desirable than having to fly three to four hours.” 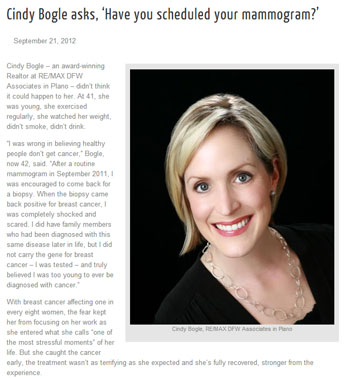 Today, I published an article I wrote about RE/MAX DFW Associates REALTOR Cindy Bogle to the RE/MAX of Texas News Online website.

Here are the first two paragraphs of the story:

Cindy Bogle – an award-winning Realtor at RE/MAX DFW Associates in Plano – didn’t think it could happen to her. At 41, she was young, she exercised regularly, she watched her weight, didn’t smoke, didn’t drink.

“I was wrong in believing healthy people don’t get cancer,” Bogle, now 42, said. “After a routine mammogram in September 2011, I was encouraged to come back for a biopsy. When the biopsy came back positive for breast cancer, I was completely shocked and scared. I did have family members who had been diagnosed with this same disease later in life, but I did not carry the gene for breast cancer – I was tested – and truly believed I was too young to ever be diagnosed with cancer.”

Today, I wrote and published an article titled “Send potential clients a listing presentation video e-mail” on the RE/MAX of Texas News Online website that instructs RE/MAX agents how to use the powerful LeadStreet platform to send a video listing presentation to prospective clients.

I created the e-mail message in the LeadStreet system (RelianceNetworks). When the prospective client receives the message, it links to a page that I developed that includes art designed by Brian Miller and that contains an embedded video produced by Mike Sumerlin.

I’m proud of this story because it communicates the value to its audience of the content we create for RE/MAX Realtors in Texas to use to increase their business.

The story was one of the most popular ones I wrote and posted on the RE/MAX of Texas News Online website.

Today, I published a story I wrote about a group of communication students and alumni who are working on a special film project to educate local youth about HIV and AIDS.

A scene opens with the dialogue: “And, where are you supposed to be going — I thought you were hanging with me today?”

The questions come from a concerned aunt, standing between her niece and the door, arms crossed and defiant. It’s a scene from a new series of videos called Caught Off Guard that 17 students from the Jack J. Valenti School of Communication are working on to promote HIV education and STD awareness to high school students in Houston.

In the scene, the niece explains it’s the two-month anniversary of her relationship with her boyfriend — and they’re going to celebrate. Alone. The aunt moves closer, her defiance transforms into concern, and she embraces her niece. “Ashley, and are you OK with that?”

The “Aunt Tamika” character is played by Ameka Jackson, a UH-Downtown psychology student. The character’s name is a play off of the name of Caught Off Guard writer and director Tamecia Henderson, a media production major and business management minor who is gaining real-world experience in the film industry between classes and coursework.

Today, a story I wrote about Psychology professor Julia Babcock was published to the College of Liberal Arts and Social Sciences website.

The story is part of the ongoing Faculty Spotlight series. I also took the photo of Dr. Babcock that accompanies the story.

Here is the first two graphs from the article:

Psychology professor Dr. Julia Babcock said she wishes she knew how to end domestic violence; for the past 13 years she has researched and instructed courses about the subject at UH. As co-director of The Center for Couples Therapy, she guides graduate students in the process of assessing couples who may be at risk, and Babcock believes that what lawmakers are currently doing is not working.

“I wish I knew how to end domestic violence,” Babcock said. “I think the answer is a lot of education and prevention. We’ve done some research to show that the existing treatments that we have that are often mandated by the states aren’t very effective. I’m beginning to think that early intervention and prevention is maybe the way to go. That means intervening with at-risk couples early on … I think that those kinds of interventions that decrease harmful fights are also likely to decrease and prevent domestic violence.”